Lecture: Water ice on the Moon

Lecture: Water ice on the Moon

Dr Vincent Eke will review the state of our knowledge about water ice on the Moon, including recent measurements from the Indian Chandrayaan 1 and NASA Lunar Reconnaissance Orbiter missions, and also including the LCROSS experiment, which crashed a rocket into the Cabeus crater. 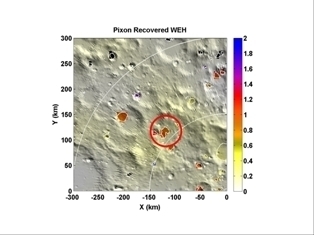 The LCROSS experiment, crashed a rocket into the Cabeus crater in October 2009. Dr Vincent Eke’s research has helped inform NASA’s decision about where to crash its probes into the Moon’s surface in search of water.

The Lunar CRater Observation and Sensing Satellite (LCROSS) and its Centaur rocket smashed into a crater in the Cabeus region of the Moon’s South Pole.

Approximately 350 tonnes of material was propelled into the sunlight so scientists studied its composition using ground-based telescopes. Cabeus was identified in a previous study led by Dr Eke as a site with high concentrations of hydrogen – a key element in water.

According to the findings, water in the form of ice could be found in the frozen confines of the Moon’s polar craters where temperatures are colder than minus 170 degrees Celsius.