16th October Lecture: Introduction in the Egyptian Belief in Astronomy

Barbara Atkinson (Volunteer)  will be giving a talk on “Introduction in the Egyptian Belief in Astronomy” on Sunday  16th October 2016 from 7 pm in the Discovery room of Washington Wetlands Centre .

Egypt’s most important star deities were those which were visible every night, and their belief was so strong that various tombs and temples had their ceilings decorated with views of the night sky.

Seti I and Rameses VI’s burial chambers depict these scenes as does the tomb of Senmut. These ‘astronomical ceilings” are amongst the most important surviving Egyptian “astronomical documents.”

Senmut’s tomb contains the ‘oldest and intact representations of the northern constellations, and is also ‘the earliest preserved ceiling discovered to date’. 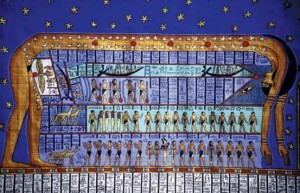 The pyramids were aligned with Orion’s belt, in order for the Pharaoh to ascend to the stars, they were built in astronomical alignment so the Pharaoh could rise up to the heavens where he would have immortality.

As we can see, Orion is depicted as Osiris (the deceased Pharaoh), with the belt being that of the pharaohs kilt.