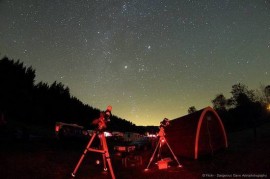 The Kielder Forest Star Camps are run twice a year, in the spring (usually in Feb/March) and in the autumn(usually in October).

Originally setup and organised by members of Sunderland Astronomical Society(SAS), and now organised by the Kielder Forest Camp Site.

All activities on the main day Saturday are free to attend.

20th October Lecture: Giant Impact Simulations: Why Does Uranus Spin on its Side?

Uranus spins on its side. With its spin axis pointing almost at right angles to those of all the other planets, the common explanation is that a proto-planet at least as large as the Earth crashed into the young planet, sending it spinning in this new direction.

Giant impacts like these were common events in the early solar system and help explain many other mysteries such as the origin of the Moon, as well as features of the exoplanets we see around distant stars.

Jacob’s team run supercomputer simulations with millions of particles to re-create and study these cataclysmic events.

In this talk, Jacob will focus on our recent work with Uranus and how this violent impact might also explain the planet’s extremely cold surface, strange magnetic field, and unusual satellite system.